How Can We Help?

Our Health Library information does not replace the advice of a doctor. Please be advised that this information is made available to assist our patients to learn more about their health. Our providers may not see and/or treat all topics found herein.

Resection is another name for any operation that removes tissue or part of an organ. Bowel resection, also called partial colectomy, removes a diseased or damaged part of the colon or rectum. Bowel resection can be done for many diseases that affect the colon, such as colorectal cancer, diverticulitis, or Crohn's disease.

Laparoscopy for bowel resection usually involves 3 to 6 very small incisions instead of one large one. Recovery time is faster.

You and your doctor will think about several things in deciding whether you should have open resection or a laparoscopy. These include:

Sometimes a laparoscopic surgery has to be changed to an open resection during the surgery.

How It Is Done 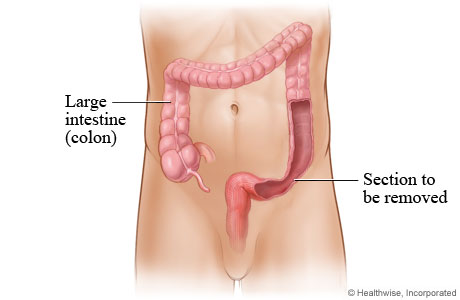 A partial colectomy is surgery to remove part of the large intestine (colon). This surgery is often needed for health problems such as diverticulitis, cancer, Crohn's disease, or colitis. These diseases can lead to problems with the colon, such as blockage, inflammation, lack of blood supply, or perforation.

A partial colectomy is also called a bowel resection. 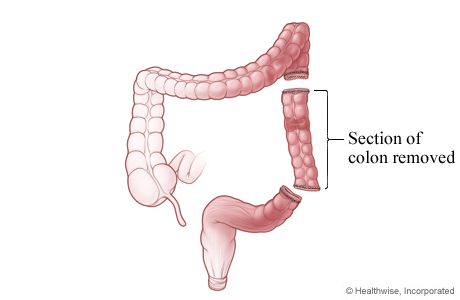 First, the surgeon removes part of your colon. 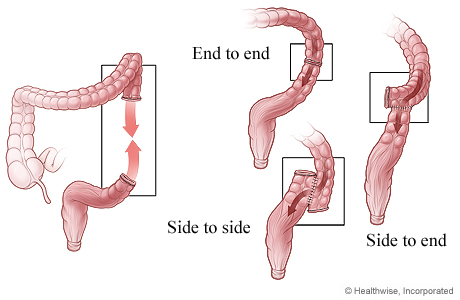 In many cases, the surgeon can reattach the ends of the colon in the same surgery. The ends can be reattached end to end, side to side, or side to end.

But sometimes the ends can't be reattached until the colon has had some time to heal. In this case, the surgeon will need to create a stoma. 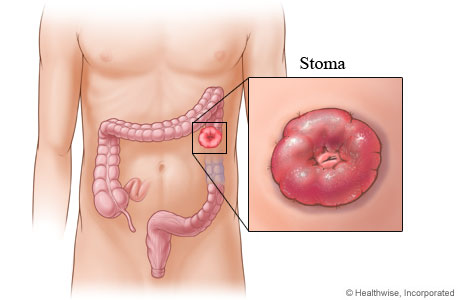 To create a stoma, the surgeon makes an opening in your belly and connects part of the intestine to that opening in the skin. This opening is the stoma.

After you have this operation, which is called a colostomy, waste will leave your body through the stoma instead of through the anus.

This completes the first surgery. You then have to give your colon time to heal. 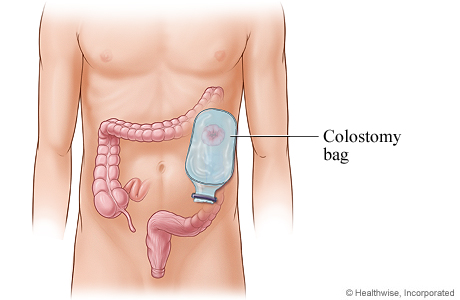 There is no muscle around the stoma, so you won't be able to control when waste or gas passes out of your body. To collect the waste, an odor-proof plastic colostomy bag (also called an ostomy pouch) is placed on the stoma. The bag is held to your skin with an adhesive or tape. Body waste passes from the colon through the stoma into the colostomy bag.

Bowel resection requires general anesthesia. You may stay in the hospital for 4 to 7 days or as long as 2 weeks after surgery.

When the two-stage operation is done, the time between operations is usually 6 to 12 weeks.

The recovery time after a one-stage operation or after the final operation of a two-stage surgery is usually 6 to 8 weeks.

Why It Is Done

Bowel resection may be done to remove cancer or when the colon cannot function normally because of damage or disease. You may need a bowel resection if you have:

How Well It Works

Bowel resection is the most successful treatment for invasive colorectal cancer.footnote 1

Some people who have two-stage surgeries may not have the second part of the surgery to reattach the intestine and repair the colostomy. This is often because the intestine does not heal well enough to be rejoined.footnote 3

Surgery is not a cure for Crohn's disease. When surgery for Crohn's is needed, as little of the intestine as possible is removed to keep the intestines working normally. The disease tends to return to other areas of the intestines after surgery. In children, surgery may improve well-being and quality of life and restore normal growth and sexual development.

All surgeries have some risks of infection, severe bleeding, or complications from general anesthesia.

Possible problems after a bowel resection include: